I was really enjoying the talks in funny shit thread and would like them to continue. Logan had questions that needed answering, and more people need to be conned into buying grubby meals.

Jayme mentioned extra sauce option on burgers as a necessity. I'd agree here for Macs and Fillets. I'm also all for some Mac sauce on a quarter pounder.

Phil - Your experience with the King of Fish was pretty hilarious, sucks you didn't enjoy it. I don't think I've got shitty tastebuds and thoroughly enjoy the taste, I guess your diet of lentils and eggplant in a bucket only might have warped your sense of taste. No, I'm just joking I know you eat other foods!

But seriously folks, lets talk more about fast food. Maybe Aidan can try convince us that he "Doesn't actually eat KFC that much anymore". Must be too busy eating homemade fishburgers and "hotdogs" amirite?
Last edited by niXon on Thu Jan 19, 2012 11:33 am, edited 1 time in total.

KFC is too inconsistant, not worth the risk.
Top

Yeah agreed. I'll eat it once in a blue moon when hungover and suffer severe post purchase anxiety every time. I'd bloody love a double down right now though.

Good KFC is superior to anything else, its just that good KFC seems to be more elusive than the Kiwi.

Carls Jr is definitely my favourite as far as selection/pricing/taste goes. It does come with post meal fatcunt syndrome however.
Top

I think some things are less risky than others. Burgers are fairly consistant, chips are not. Chicken is usually pretty alright, but hot and spicy is more consistant than regular. In fact, It's really just the chips that lets KFC down. I would say the most inconsistant fast food is subway, cause sometimes they throw it together like its a bowl of spaghetti and sometimes they lay it out like a complex piece of machinery being put together. Burger King can be a bit hit and miss sometimes too I think.

Mcdonalds obviously the most consistant, but I've noticed the burgers are put together pretty badly since they begun that whole "everythings fresh" bullshit.

Dude I knew from germany saw a real life kiwi in the wild while camping in some remote area. I was furious, don't reckon I'll ever see one in the wild.

Carls is too far to travel for me, only made the journey twice. Jalapeño thickburgers are the fuckin man though.

$2.90 for two of them but you can mix and match. They are tiny though, if you look at the pictures they are about the same size as an onion ring, or a slice of gherkin.

bk need to bring back the xl triple stack. shit was the decent.

If KFC could nail their fries, they'd be the best out. Good KFC fries are so good. Bad ones can seriously ruin what is usually an otherwise acceptably mediocre meal. I do enjoy a works burger.

I prefer a good burger from BK over a McDonalds burger, but McDonalds are certainly more conistent. Have had too many charred patties at bk. Fuckin dig the Mighty Angus at maccas though, and the Chicken Chomp meal is a good deal imo. McChicken burger is fantastically simple, works well.
I think it's lint.

niXon wrote:Dude I knew from germany saw a real life kiwi in the wild while camping in some remote area. I was furious, don't reckon I'll ever see one in the wild.

dont get too shitty, it was most probably a weka.

anyone who enjoys the fillet o' shit(how can they call it a fillet? thats fucking false advertising, its a fucking patty), has really got no business discussing food at all, seriously, its just fat starch sugar and salt, thats fucking it.
it reminds me of prison food.

lately my main diet has been soba noodles(japanese buckwheat vermicelli) with miso and broccoli, i was eating 2min goreng noodles a bit too often and decided id find a healthier alternative, it takes the same time to prepare as 2min noodles(aside from the brocc, but i was adding that to 2min noodles anyway so its the same) and came up with this, way yummer, way healthier, actually faster and significantly cheaper, pretty much a win all around if you ask me.

other than that i eat all kinds of shit as the mood strikes me, new years day i had a fucking delicious eye fillet, christmas food in general is damn fine stuff, i got a hunk of kangaroo in the fridge i gotta get around to eating.

i generally try to eat watercress as often as possible, pretty had to get any but that weak ass salad shit at the moment tho, when it was in season i was having a boilup at least once a week, 1 3rd bacon bones 2 3rds pork bones and potatoes and watercress usually, i dont get down with doughboys, add punkin and/or kumara if ive got it, sometimes do it with puha too, but i usually find watercress is just as easy to hunt down in any quantity and i like it better, if watercress was a woman id propose to it.

ive also come up with a vegan boilup, which is fucking delicous, and a similar watercress and broccoli soup, which is also vegan obviously, despite the above descriptions i try not to munch too hard on meat, both for health and ethical reasons, but im weak willed and hypocritical, so yeh.

as mentioned in the other thread, kebabs and burgers are my takeaway mainstay, but seldom resort to BK/KFC/MCDs unless im drunk, or sometimes hungover and dont want to leave the car, haha.

stink options, couscous is crap, i mean i like tabbouleh of course, but its much better made with bulgar wheat, or even better, quinoa...

i wonder if you realise that couscous is just pasta?

That poll options are yes or no, obviously. Don't look so deeply into it.

but i hate coucous, then again i suppose id rather eat a bucket of it with raw eggplant that a fucking o' fish again.

Would you get another fillet-o-fish (extra tartare) if someone paid for it? You'd need to post pics as proof with your smartphone camera.

Quit with this talking about what food you cook at home, this shit aint about that. Fuk of.

actually adumb, if you read nixons first post in the thread he specifically mentioned what i eat at home so i had to set the stage correctly, better to get it out of the way i thought.

i dont have a smartphone anymore, i got fucked up and some douchebags nicked it, but if i was drunk i would, aidan can take a pic with it on his phoneless camera, il probably go to that missing teeth show

This is pretty much all I could think about when Phil was talking about what he eats at home: 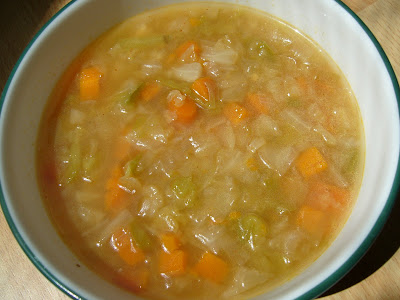 Less of that, more talk of grease.

Touching on home cooking, for pretty fucking delicious chicken, get a couple of breasts, dredge through some egg, and coat with crushed up doritos. Fry or bake. Pretty fucking decent.

gonna try your chicken steez tonight
I think it's lint.

Yeah we've coated our chicken drumsticks in chips before, delicious.

doritos are pretty shitty, but i kinda like the spicy ones... that soup looks ok, bit poor tho, needs a bit of red and green in it, i suppose it could taste great or it could taste shit, no way of knowing, soup you buy is seldom any good, but home soups are fantastical almost always.

it seems like you guys like food all the time, that id only eat if i was drunk.

whats the best flavour for excellent results? I'll probably chuck some mozarella over that shit.
I think it's lint.

I don't actually eat a hell of a lot of fast food these days, once a week probably but that's not the point of this thread. No more talk of boiled cabbage ok Phil? Otherwise you're not allowed in this thread and I'll have the mods ban you from it as I know them personally.

Red_switch wrote:whats the best flavour for excellent results? I'll probably chuck some mozarella over that shit.

Only tried with Salsa and Double Cheese. Salsa was best, couldn't really taste the cheese ones. Stuffing with mozarella then coating could work pretty well.

Maybe a little. I shit like a god now though.

but i havnt mentioned boiled cabbage, i dont usually put cabbage in boilup, i only really use it in stirfrys, and not often at that either.

but since you bought it up, ive been thinking i might do a traditional irish bacon and cabbage on paddys day this year, tho i might replace the bacon with cornbeef like the american irish do, cos i like cornbeef better than boiling bacon.

cabbage in a boilup is ok tho, but its the least inspiring of boilups i reckon, and it goes off fastest too.

this is doing the rounds on facebook, figured id chuck it here for your edification

Can You Guess What McDonald’s Food Item This Is?

Say hello to mechanically separated chicken. It’s what all fast-food chicken is made – things like chicken nuggets and patties. Also, the processed frozen chicken in the stores is made from it.

Basically, the entire chicken is smashed and pressed through a sieve — bones, eyes, guts, and all. it comes out looking like this.

But, hey, at least it tastes good, right?

BK Chicken and its kin (notably the one they chuck onion rings and BBQ sauce in) + relatively consistent fries make Burger King the best.

Users browsing this forum: No registered users and 20 guests