Politics and the rest of world's madness all in here!
Post Reply
136 posts

I'd say becoming more Authoritarian means you're hardening up!

I think that's further left and more libertarian than last time I took one of these: 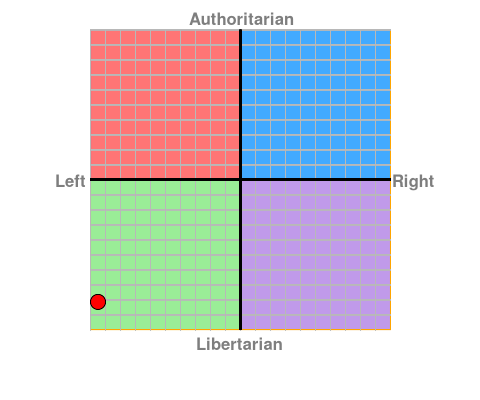 . wrote:or just becoming more of a stink cunt in your old age

I'm kind of interested in how other less bottom left people I know answer the questions as I never think the answers I give are that extreme
http://hungjurynz.bandcamp.com/
http://www.discogs.com/user/pertHJ

I think this time I said sometimes breaking international law is justified, and probably disagreed on a couple of things I strongly disagreed with last time. I care less.

So is apathy the same as being centrist?
http://hungjurynz.bandcamp.com/
http://www.discogs.com/user/pertHJ

I don't think so, centrists can still have quite strong views.

My view is exactly the same as Perts, but dont call me a hippy

I don't really like the concept of the political compass in general, but I guess its a more rational approach than simply right or left.
I especially disagree with a lot of the way the questions were phrased, quite leading I thought, each question treated the topic as a duality, whether it was or not, and forced you to take a for or against stance, some questions, like the one about eugenics, 'do you think people with inheritable disease should be prevented from breeding?' could have been phrased better, as in, 'do you think people with inheritable disease should reproduce?'
seems like its forcing you to take a strong position, its a very different thing to say you think they shouldn't be allowed.
I found a lot of the questions were like that, and i often answered in such a way that leaned the scale left, even tho its not what I truly believe, simply cos of the way it was phrased, I only support leftwing stuff as an antidote for rightwing, I'm not a believer in the state, but social services that help people displaced and impoverished by a capitalist society are better than a simple lack of them, doesn't mean I'm a fan of fucking Stalin, or that bullshit artist Ghandi for that matter.

oh well, who cares, I bet 90% of the people who think they are hippes are authoritarian nutjobs anyway.

p.s. I reckon the average Kiwi taking this test wouldn't suddenly realise they are supporting the wrong party, I reckon they would look at the questions and not have a fucking clue what half of them meant.

You're on the left and libertarian spectrum of the political compass! You question authority and are deeply distrustful of hierarchy. You believe strongly in personal liberty and individual freedoms. You firmly believe in a self-governed and non-hierarchical society with maximum individual freedoms for all. You support women's rights, gay rights, and liberal attitudes on sex. You, however, favor collectively owned property and an economy that guarantees equality and opportunity. You believe in strong communities and favor a cooperative economy over dog eat dog capitalism. You're a lefty, but you hate big government just as much as the next libertarian! What do you think? Do you agree?

that's what i got too

mining my facebook page for punkas posts are we pert?

this morning i took this, but was still half asleep as we got up still half drunk at 5am to look after a friends kids while she shat out a new one, i think i hit the wrong button a few times in my groggy state, cos i got something called 'collective left' which was between nazism and socialism, tried it again just now and got this which is far more expected, but i still tend to self evaluate more toward anarcho-mutualism, 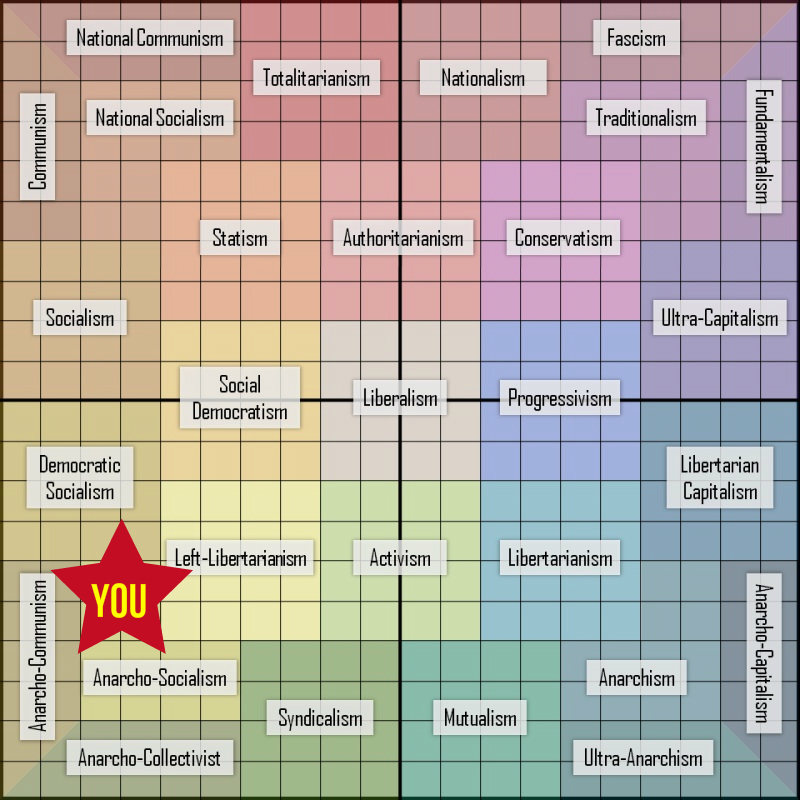 as i said on faceplop, this is almost the direct opposite of how i self evaluate my political beliefs, but i decided it must be cos i support government intervention and a whole lot of stuff rightwingers call 'the nanny state' these days, like conservationism, and social welfare, not cos i think we SHOULD need them, but cos we need to clean up the mess weve made before we can move on.

no i think i just hit 'strongly agree' when i meant 'strongly disagree' a few times, or vice versa.

not sure that 20 odd questions is really enough to evaluate anyones political position with any great degree of accuracy, but despite that, i think people should take these, it at least makes you think about it.

I find it a bit weird that the compass position is exactly the same for a bunch of people, kind of seems like there's only a few different "profiles". I think I liked the old compass better (link in first page of thread) as it gave actual coordinates which made it easier to judge others and feel holier than thou

9seconds wrote:mining my facebook page for punkas posts are we pert?

I tried posting on that thread but facebook isn't letting me make any posts at the moment (???)

But yeah, I have taken to pilfering interesting shit off FB and chucking it up punkas
http://hungjurynz.bandcamp.com/
http://www.discogs.com/user/pertHJ

yeh i agree, theres not many questions so there logically cant be too many different results

i like how each sector is marked and named, but it seems a little iffy for a few reasons, for instance, even tho we all scored 'left libertarian' the star is actually next to it in 'anarcho socialism'
'left collective' looks like its suspiciously a nice way of saying 'neo nazi', nice to see it where it belongs on the left tho, cept im so used to considering nazis 'right wingers' i dunno if i can adjust, lol.

looks like theres only 4 possible results, these are the other two. 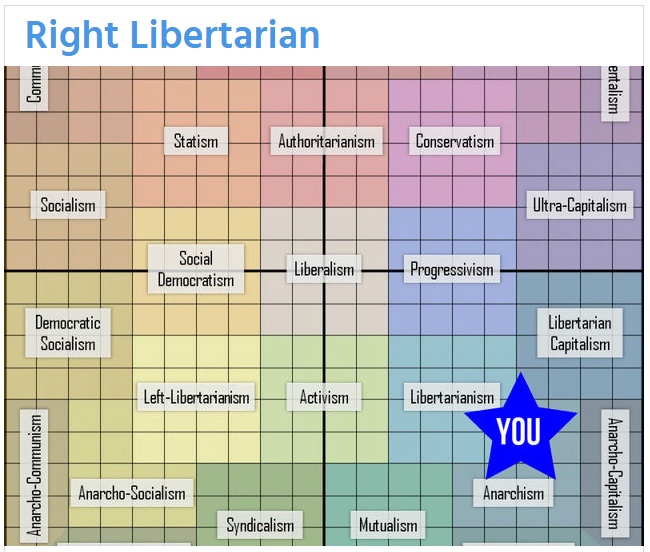 You're on the right and libertarian quadrant of the political spectrum! You prize individualism and personal liberty above all else. You believe in private property and the free market. You tend to be patriotic but you're sceptical of the state and you find little to no value in government institutions. You believe that success depends on the individual's ability to pull themselves up by their own boot straps and take advantage of the opportunities they have. You see taxes as a form of oppression and you believe that the greatest threat to freedom is big government. You believe in a society of independent and hard-working individuals who take care of themselves. You want big brother out of your bedroom, out of your bank account, and off your property! 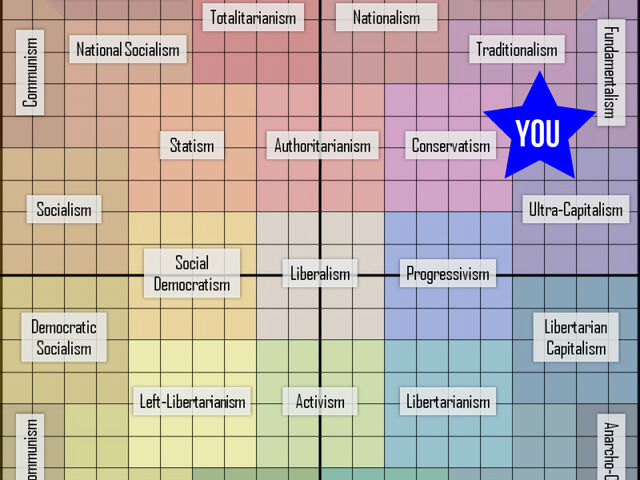 You're on the right and collective quadrant of the political compass! You believe in a strong military, an efficient government to intervene when necessary, low taxes and a free market economy. You value tradition, hardwork, and you tend to respect religious authority. You're patriotic and sceptical of people looking for a hand out. You believe in government institutions and you have a strong sense of belonging to those with the same nationality as you. You believe in individual freedoms, but you also take into account tradition and social order. Anarchy and communism are your worst nightmares!

some interesting commentary on the validity of this test
https://www.reddit.com/r/badpolitics/co ... tion_test/

You question authority and are deeply distrustful of hierarchy.

I think it's more that I'm distrustful of people in general, people at the top of hierarchy/authority can certainly abuse power and so need to be kept in check - but I also believe that some form of authority can help to keep other humans from doing shitty things.

You believe strongly in personal liberty and individual freedoms.

I guess so, so long as individual freedoms don't harm others

You, however, favor collectively owned property and an economy that guarantees equality and opportunity

You believe in strong communities and favor a cooperative economy over dog eat dog capitalism.

but you hate big government just as much as the next libertarian!

Haha I did the moral compass (linked from reddit) but I can't get the results without signing up to OKcupid. Some of the answers are kind of difficult to choose.
http://hungjurynz.bandcamp.com/
http://www.discogs.com/user/pertHJ

i think maybe its that a libertarian would be against rampant inflation, but not care a fuck about unemployment.

Stumbled upon this today, kind of relevant 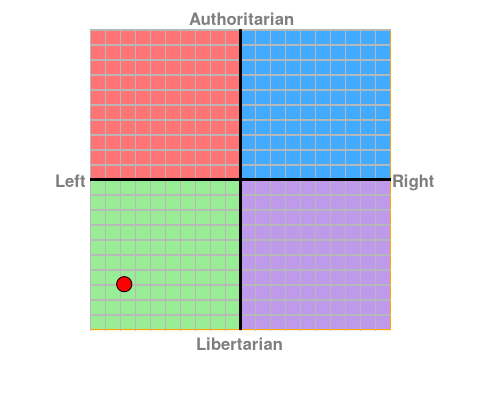 Looks like 'The Definitive Political Orientation Test' is just a shitter version of the test on the Political Compass website. 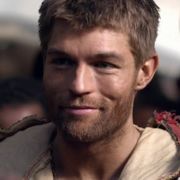 i do like that his compass maps out other political positions, albeit with questionable accuracy

sounds like an effective IQ test to me 'are you dumb enough to give away your money?'

9seconds wrote:sounds like an effective IQ test to me 'are you dumb enough to give away your money?' most accurate one yet, and seems like a lot of people who i think are pretty smart agree.
certainly much closer to where i self-describe my political beliefs, close enough in fact that il say its probably right.