Chaos Promotions NZ and Headless Horseman are proud to present: 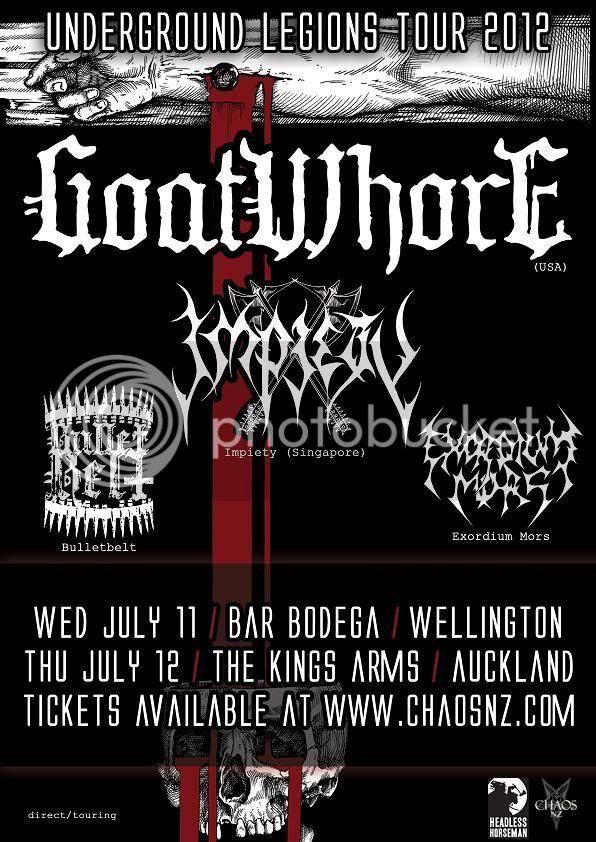 Wellingtons Black Metal horde Bulletbelt and Aucklands fearsome black/thrash Exordium Mors will open the show in each city. This is a tour package that metal audiences can't afford to miss!

Goatwhore were last on New Zealand soil supporting Behemoth and Job for a Cowboy in 2010, immediately winning over audiences with their unique brand of extreme metal. The band returns in support of their critically acclaimed new album, Blood For The Master released in Feb 2012 via Metal Blade/Riot.

Inspired by the old guard of Celtic Frost, Slayer and Kreator but with a modern and vicious twist, Goatwhore are one of the most talked about bands in metal today. Featuring members from Acid Bath, Crowbar, Nachtmystium and Soilent Green, Goatwhore have risen to become legends in their own
right.

Impiety have been spewing forth unholy hymns for over 20 years. They are highly regarded in the extreme metal underground and are one of the only Asian metal bands to have a large and dedicated worldwide following This will be the first time they have toured New Zealand and the band will be blasting new material from their new record Ravage and Conquer.

Nor so fussed on Goatwhore but keen as for Impiety!
Top

really? carving out the eyes of god is an awesome album. wasn't overly stoked on the new impiety but fuck i wish i was going to either of these.
We must secure the extinction of all people and no future for any children
Top

how much is this on the door

Pretty keen to check out Impiety. This could be mean.
Top

Pre-sales are up at Chaos NZ Promotions.
Top

On the Anger Management Radio Active metal show this Monday night, 2 July from 11pm, is an 'Underground Legions Tour' special!!!!

Featuring an interview with Shyaithan from IMPIETY and new music from GOATWHORE, IMPIETY, Exordium Mors, and Bulletbelt!!

This will be the complimentary 'punch in the face' before the Underground Legions Tour strikes Wellington on 11 July and Auckland on 12 July!!!!

Just buy a ticket from http://www.chaosnz.com to either the Wellington or Auckland Goatwhore/Impiety shows, before 5pm Tuesday 10th July and go in the draw for the following...

The barcode on my e-ticket is broken, wtf people!
Top

I had the same issue on a ChaosNZ ticket the time I bought one. The barcode was broken on the email. I'd saved the confirmation page so I had the barcode on that. Emailed them about the problem but never heard back.

I get pretty nervous when promotors dont use regular ticketing (Where funds are held so they can be returned to the customer if anything goes wrong with the show, opposed to going straight into someones paypal?!). Makes me reluctant to buy one and hang out for a door sale.
Top
Post Reply
14 posts • Page 1 of 1